The Metaverse – What is Web3 and Why Is It Important?

Home > The Metaverse – What is Web3 and Why Is It Important?

The Metaverse and Web 3.0.  It seems like these terms get thrown around more and more these days but most people aren’t really sure what they actually refer to. Is this some new take on virtual reality? Will I have to upgrade my computer? Perhaps new tech will bring the internet a bit more into the real world? What does any of this have to do with me and should I even pay it any mind? The answer might surprise you, so buckle up for a brief crash course in where we’ve been, where we’re going and how that journey can and will impact your business plan in the months and years to come.

There is a coming shift in the evolution of the internet that will impact the way we interact locally as well as globally. It’s admittedly an exciting time but it can be a little overwhelming to the uninitiated. Some of these things have already started to happen and others are still in their infancy but as history has shown it’s always helpful to “be ready so you don’t have to get ready”.

A Brief History of the Internet

Now wait a second, you might be saying to yourself, how are we on Web 3.0? When did I miss Web 1 and 2? The first time we started sending data long distance was in the late 60s and early 70s with the birth of ARPANET. This network could only be accessed from a few places nationwide and really only by military and university personnel. You couldn’t do more than type commands into a black computer screen with the hopes of getting back the information you were looking for. It let early users share and look up data that was stored far away, but was slow and clunky at best.

Fast forward a few decades and tech had taken a huge leap forward into Web 1.0 which gave us access to consumer level internet with dial-up modems popping up in homes across the globe. We now had a dedicated way to navigate online through early web browsers and instead of issuing commands, users started clicking on links and typing in URLs. The first brave souls to enter their credit card numbers online were rewarded with the ability to purchase things without ever leaving their homes but we were just getting started.

Jump forward in time again and now we arrive at Web 2.0 with the dawn of social media, we’re no longer just clicking on links but asking for likes. Leveraging much faster connection speeds users now just don’t access the internet at home but also on the go which makes mobile experiences a priority for everyone. Internet access from basically anywhere on the planet creates the need for using “the cloud” and gives rise to services like Netflix, Spotify, Google Docs, GrubHub, and Uber which changed the face of their respective industries. 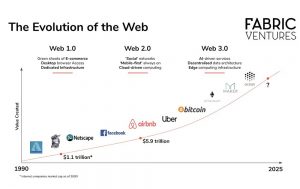 Think about how much the rapid evolution of the internet has changed the world in a short period of time. From a business perspective, the jump to Web 2.0 democratized a bunch of tech and made it available to the masses for the first time. Credit card payments, video streaming, appointment booking, graphics creation and targeted advertising (to name a few) all became part of the toolset that any business could use, not just the big players. More recently we saw this widespread availability of free and cheap tools coupled with the impact of COVID-19 sparked the Great Resignation which had people quitting their jobs in droves to pursue that side hustle which now seemed attainable as a full-time gig. Music artists could find success without a record label and authors could self publish without a book deal. Digital and remote experiences have been rolled into our everyday lives. How often do you schedule a regular conference call versus the now seemingly ubiquitous Zoom, Teams, or Google Meet?

In that same way Web 3.0 is the next big wave of internet innovation that aims to up-end and transform the world as we know it, putting even more power back into the hands of end-users and in turn opening the door to new possibilities for entrepreneurs. Let’s talk a little bit about the way that might look and introduce you to some of the concepts.

While the suits at Facebook were quick to jump on their rebrand to align with the upcoming paradigm shift, the Metaverse is not, as some folks believe, something that is owned and operated by Meta. Instead, think about the concept as a more interactive and immersive version of the internet, accessed by a singular login, that creates a digital version of yourself, an avatar. Where the current internet exists in silos, logging into each platform separately, the metaverse envisions a future where once you connect, your avatar has access to everything like you would in the real world, by just walking in the door. Want to go buy a new pair of pants?  Visit the virtual Macy’s, try clothes on and place your order. Looking to redo your back patio? Compare the work of your local masons virtually before making a decision. Not too dissimilar from the experience we see in sci-fi films like The Matrix or Ready Player One, imagine a virtual world that’s seamless and persistent, where end users can now engage like never before. Talk about making an incredible first impression! You can work, play and live in the metaverse and both you and your audience will be able to reap real world rewards.

Maybe the most important takeaway is that even if it seems foreign to you, the next generation of consumers is already very familiar with the concept of trading real dollars for virtual ones and they power a multi billion industry. If you’ve ever bought Gold in CandyCrush or V-Bucks in Fortnite (maybe for yourself, your child, a niece or nephew), you’re familiar with the idea of trading real world currency for virtual currency and then using that virtual currency for a digital reward. Spend $100 and get 13,500 V-Bucks in return, and then use those V-Bucks to buy a new hat, costume, or dance move for your avatar. In this way, it’s easy to see how digital items can accrue actual value for this audience as these types of transactions have become second nature for Millenials on down to Gen-Z and beyond.

Now imagine that same type of transaction happening in the metaverse, but on an expanded scale and with every purchase carrying over universally to your avatar.  Businesses will need to buy or rent virtual land to build on, individuals will want to deck their avatar out in unique outfits and get access to exclusive events and that’s just the tip of the iceberg. 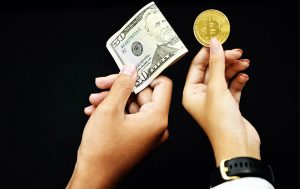 Blockchain, Tokens and Cryptocurrency, Oh My!

Blockchain is the technology that allows all of this to happen. The blockchain permits users to securely exchange their hard earned dollars for tokens like Bitcoin, Ethereum or other cryptocurrency which can then be spent for virtual or real world items. Major payment gateways like PayPal, Venmo and CashApp allow for you to pay and be paid in crypto now which will ultimately open the door to new opportunities.

These Web 3.0 innovations also seek to give end users more value with the ability to earn by engaging which not only gives them some ownership of the platforms they use but also builds brand loyalty. Imagine if Facebook, Twitter or Instagram rewarded you with tokens for the time you spend on their platform? The more you like, follow, comment and share the more you can earn. You could then use these tokens to wield influence much like stockholders do. Alternatively you could give out your own tokens as promotions or simply cash out by selling them on the open market. It might be helpful to think of tokens almost like rewards points that you earn just by being a customer but that now can be spent and traded globally once you acquire them. 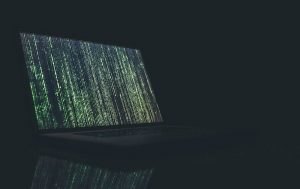 This is essentially already happening but the scale of it is going to increase dramatically in the coming years. To give you an idea of the volume shift we’re looking at in web 3.0 it’s predicted that by 2025 we will produce and consume 160x more data than we did in 2010!

Moving computing from the center to the edge basically means moving away from heavy reliance on centralized data centers and instead spreading it across all sorts of devices from appliances to smartphones, to cars and laptops (essentially anything with a chip) which in turn equalizes that processing power for everyone and rebalances data ownership. Ideally you now become the owner of your own data and can then control who you give it to and how you want to broker it unlike now where the tech giants take what they want and auction it off to the highest bidder.

The increase in processing power and the leap forward in technology drastically increases the quality of artificial intelligence. Web 3.0 supports widespread neural networks that can do everything from creative tasks, once thought impossible, to better quality searches that combat bad actors trying to game the system, and provide us with smarter results that piece together logic and patterns. For more on this, check out this video by MKBHD.

The future is bright and the possibilities are truly endless. What happens in the coming 12-36 months will most definitely play a role in the next chapter of internet history. We’re hitting a new epoch in our relationship with technology and how it shapes our social and business interactions. We’ll be watching closely as we navigate the best way to take advantage of the changes to come and launch you and your brand to the next level.